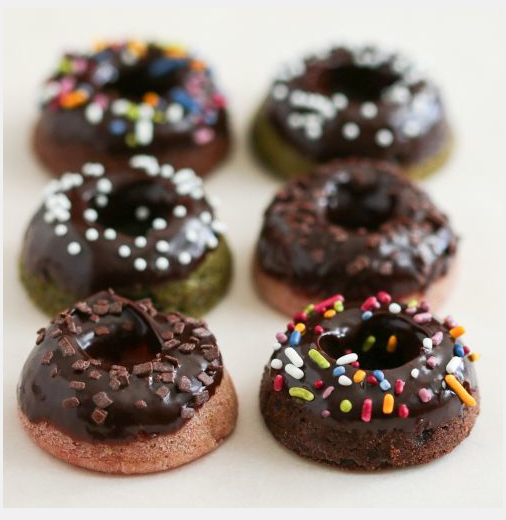 I was cleaning out my pantry yesterday. I know what you’re thinking. Who does serious cleaning in the fall? And on a holiday too? Isn’t that an activity that can wait for Spring?

I’m knee deep in the kind of hard work no one likes doing. It’s things like going through the junk drawer, throwing away earrings that have no matches, deciding if old sneakers should be donated or thrown away, power washing charcoal grills, and taping cardboard boxes. We’re moving soon. (If this is the first you’ve heard of it. I’m sorry. There’ll be more writing on that event in the fututre.) And because of this I’ve been reaching into the creepy depths of seldom visited storage corners and and making sense of them.

Fridays segment of cleaning led me to a box of sweet rice flour in my pantry. I forgot why I bought it. I knew not how long I’d had it. But I knew I needed to use it. The potential guilt I would feel, if I tossed it out, would not let me rest. I felt I must make this ingredient that is foreign to my cooking style useful. 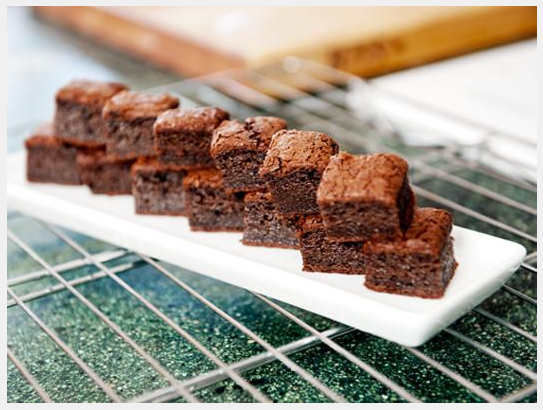 There was only one thing to do. Forget that I had other plans, and chores, and commitments for that day. I must use the sweet rice flour, and I must do so immediately. But how? I read the side of the box and found a recipe for which I had all ingredients. Chocolate Mochi. A japanese rice cake. It’s chewy, sweet, and packed with protein. Sounds smart. I made the rash decision to go for it. That was my first mistake.

My second mistake was to underestimate the simplicity of the process. Mix this, mix that, cook, mix, cook, cool…and enjoy. Easy. Way easier than traditional methods of making mochi that occur once a year, on the Japanese New Year, and involve entire communities cleaning and soaking rice in large kettles overnight, to be steamed in batches and pounded until smooth and shiny, and then pressed or molded into shapes ready to eat.

My recipe had three steps and a total cooking time of ten minutes. Here comes mistake number three. If you recall, I was not supposed to bake. I was supposed to clean. As I re-read the instructions, the ingredients in particular, I became inspired to use other items that had long been forgotten in my cabinet. My mother has always said, “Never alter a recipe that you have never tried before. Follow it exactly. Otherwise you’ll never know if it is a good recipe or not. Only after you follow the directions once, can you then make changes to make it your own.”

(If you know my mother at all this probably comes as a surprise to you.)

Not heeding this perfectly sound advice, I made substitutions and additions with other things I needed to get rid of. The recipe called for sugar and water. I figured surely I could use corn syrup. Much like the sweet rice flour, I had no idea why I had purchased the corn syrup. By the looks of the jar I had used a tablespoon of it once, and then it fell to the back of my cabinet; all of the other sweet sticky things I prefer to consume (like honey and molasses) taking the forefront. I wondered how old the corn syrup was, but then I figured it didn’t matter. I’m under the impression that corn syrup is so over-processed it never goes bad. The recipe called for an impressive amount of water. I found this to be the perfect opportunity to substitute some liquor for water. Liquor always makes dessert taste better, and I’ve been sitting on a bottle of cherry schnapps that my landlord gave me for over a year. Hot Dog! I was on a roll! Only ten minutes into the recipe and I had made use of three obscure culinary items. In the bowl they all went. Then the heating began. Enter mistake number four. 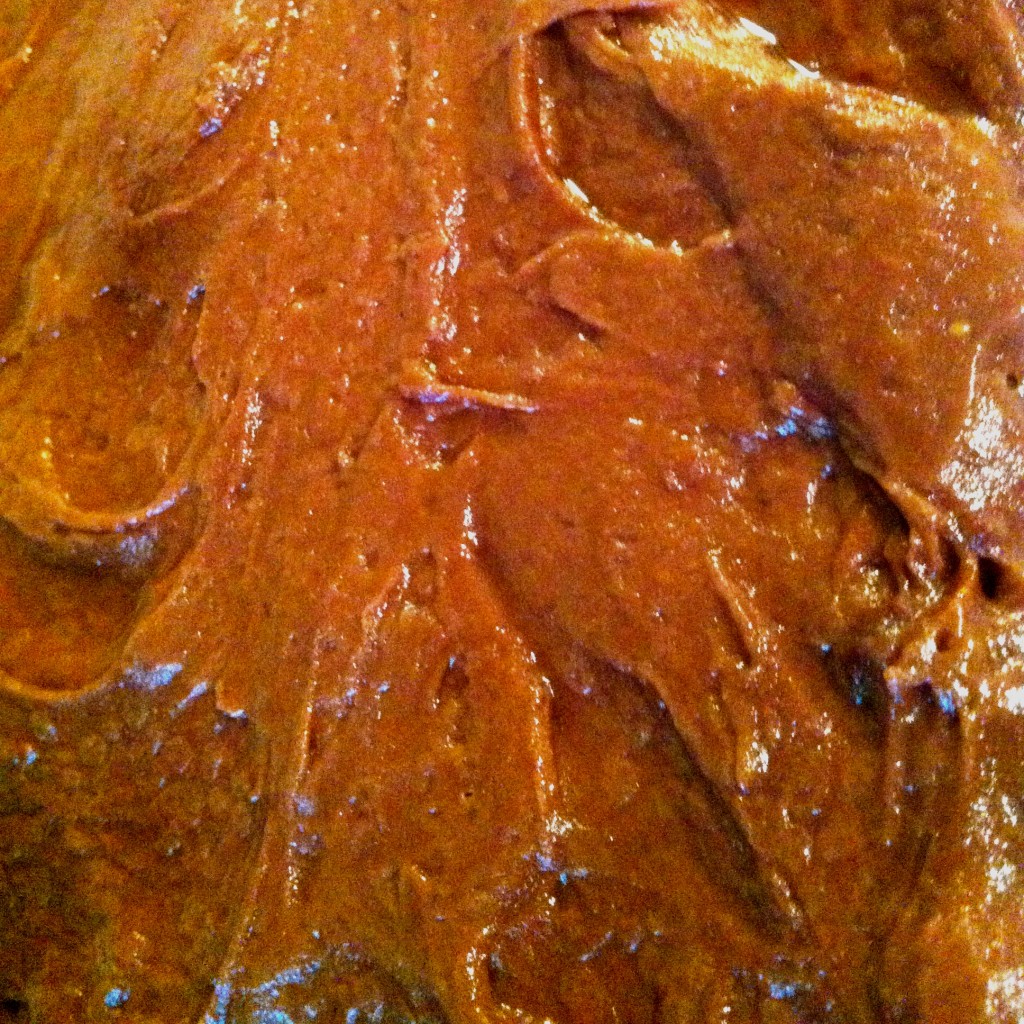 This experiment of the epicurial kind was going down in my usual lab, but there’s all new equipment. Rental equipment. The lowest kind there is. We shipped out all of our household goods last week so that they would arrive at our new living station at the same time as we will. With all of my good stuff on its way across the ocean I was forced to rent some neccessities from the on-base lending closet here. I realize that I am fortunate to be able to take advantage of such generous assistance from my husband’s employer at this time, but I should have known better than to use these loaner tools to assist me in uncharted cooking territory. The thin, plastic utensils were buckling under the strength I needed to stir the thick, sticky mass in the teflon pot. I had no idea what was happening, as my choco-cherry-mochi-concoction gained resistance.

Now twenty minutes into my process I began to distrust this recipe I had found on the side of a box, but I pressed on. After the heating and stirring it was time for the most crucial step in the process. The tasting. Since my mixing spoon and spatula had all but melted into the mochi during stirring I decided to taste the mixture by eating off that which was all stuck to my hands. It was paletable, but not edible. I was reminded of a time I had a friend over with her kids. I gave one of the kids a homemade cookie. He chewed it for a minute, then stopped. Looking rather puzzled he said, “This doesn’t taste like anything.”

It’s exactly what I went through with the mocchi. I was standing in front of a large pot full of sticky brown goo that didn’t taste like anything. Puzzled, and slightly annoyed, I refused to be defeated. In hindsight I would have been better off throwing the box of rice flour away, or offering it up for free on our community classifieds page. But now that I had cooked it, I was determined to eat it. Dare I suggest that I was determined to enjoy it. Fifth mistake.

I should have known to leave well enough (or bad enough) alone. Sometimes I feel like I try so hard to make things better that I instead make them worse. Refusing to cut my losses I spread the mochi onto a cookie sheet and left it in the refrigerator to cool while I rode out to the supermarket to get chocolate to cover it in. I thought if there was one way to spruce up this mochi, it would be to treat it like nougat and cover it in a chocolate shell.

Mistake number six was that Friday was the day before a German holiday and the last day the stores would be open for two days. The supermarket was packed with people and empty of food; much like one would be the day before a natural disaster. I fought my way through the warzone that I normally know as Kaufland and 45 minutes later returned home with white and brown melting chocolate. 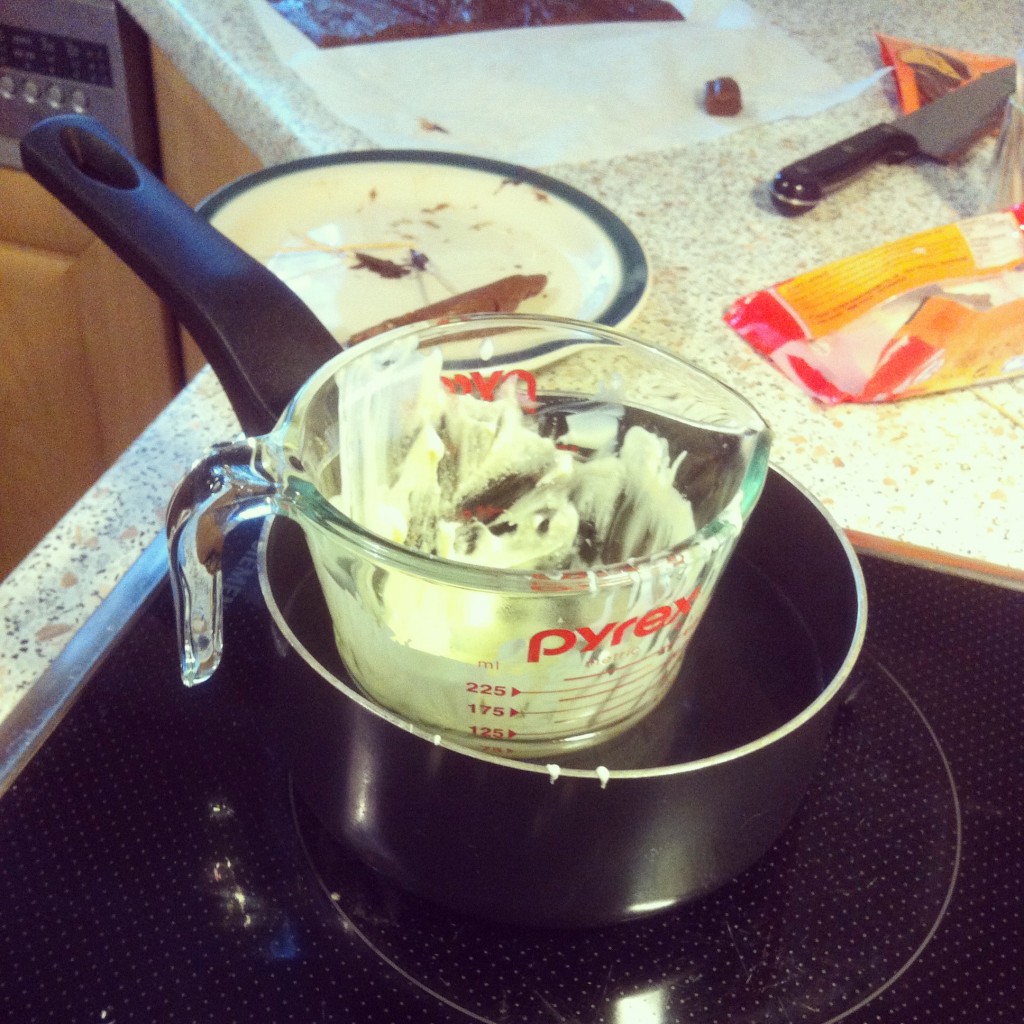 I’m not a confectionary genius. I’m not good at making pretty desserts. I don’t usually mess around with melting anything other than butter. This, paired with the detail that I was short-handed on proper equipment, resulted in a gross attempt to cover little squares of my chilled mochi with hot chocolate. The result was nothing short of ugly. 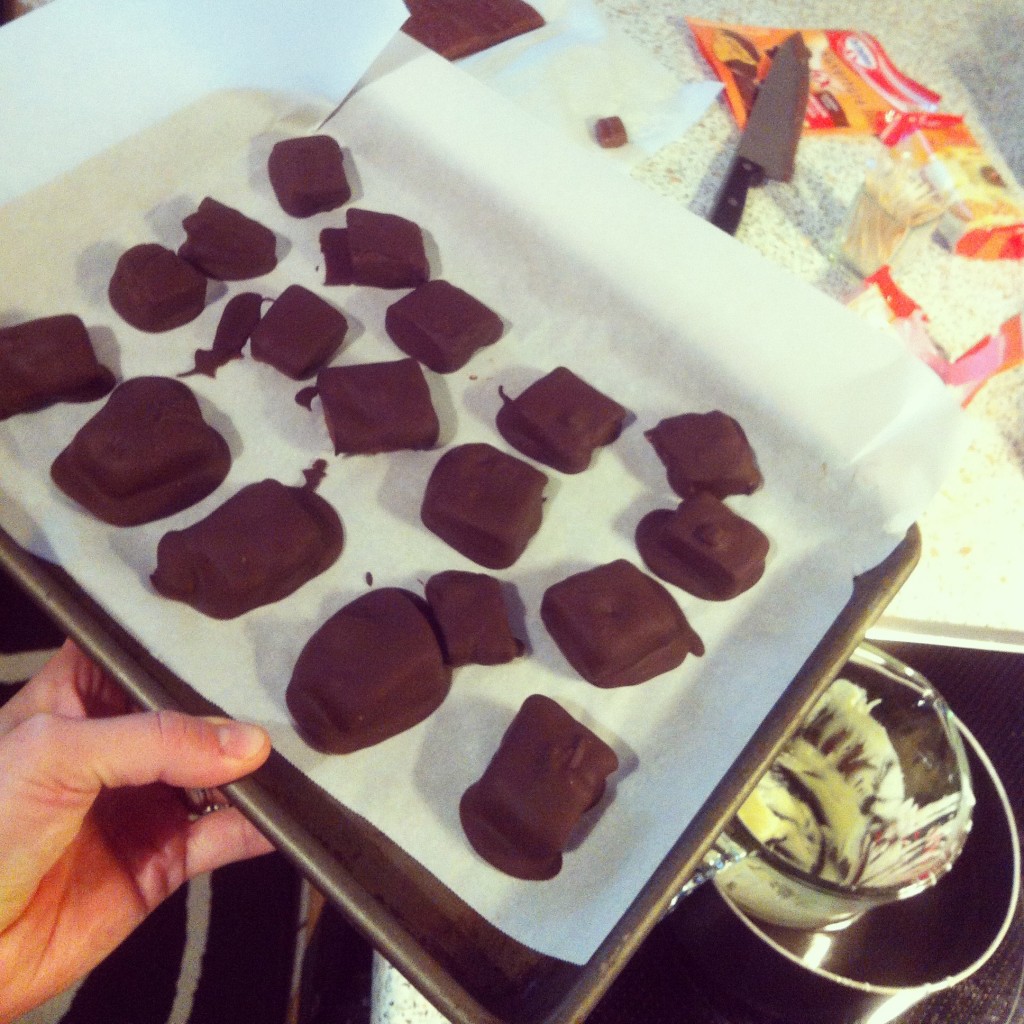 Almost three hours later I was tired, defeated, and my kitchen was a mess. I was reminded of a comment I’d received a while back from my mother-in-law. In short, it went something like this, “Don’t spend all day making soup to save the last of the celery. You’ve got more important things to do.”

I laughed at myself. There are somethings I just can’t learn. 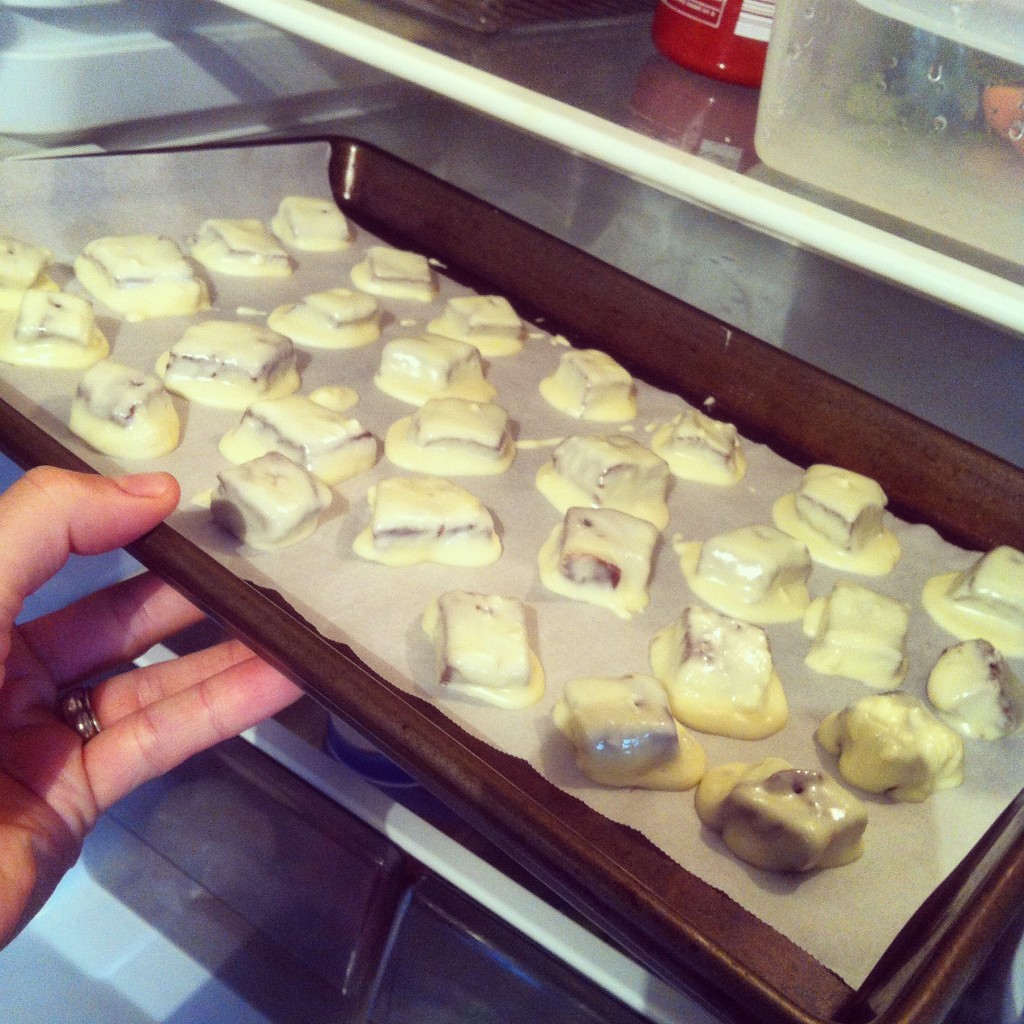 I took some boring photos to emphasize the inadequacy of the scene. It’s nothing like the pictures of sweet treats (stolen off of Pinterest) I used to lure you into reading this in the beginning.

At last I pulled a sample of the finished product from the refrigerator. Surprisingly, it was not bad. The making and eating of rice cakes is practiced by every Japanese person as the first meal of the new year. It’s considered necessary for insuring a happy year to come. I can only hope that I may be able to perversely distort this tradition to fit my own needs of desiring a healthy and happy end to my time in Germany and start to my time in Texas-on-the-border-of-Mexico.

And if you’re sitting there thinking to yourself, I can’t believe I read this boring story about how Sarah made crappy candy and reflected on the experience, just be thankful you didn’t live the experience yourself.

Enjoy the rest of your weekend.