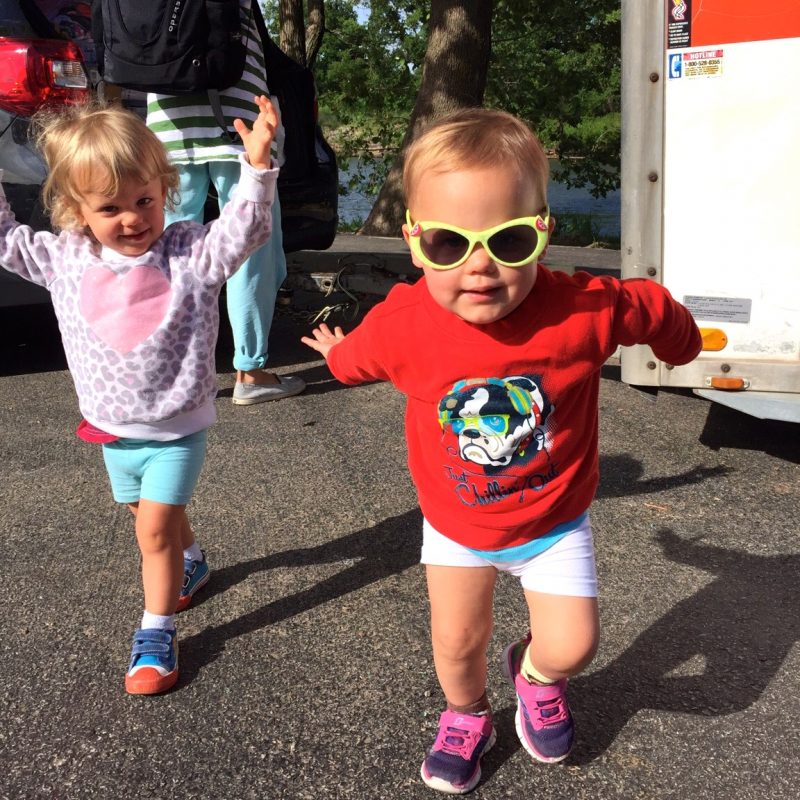 The plan was to drive from Wyomissing to El Paso in five days, but it ended up taking four.

It’s the second time our family has driven almost all the way across the United States successfully.

Yes. I’d like to play coy and say we just got lucky, but the truth is I worked hard to make the trip a homerun and it was worth it.

My husband and I planned to drive 6 hours each day. We knew we’d be stopping frequently because of the babes but we weren’t sure exactly when or why. In order to be prepaired I mapped our entire drive, with the help of the Internet, and found a nice attraction/playground for a rest at every hour interval of the journey. 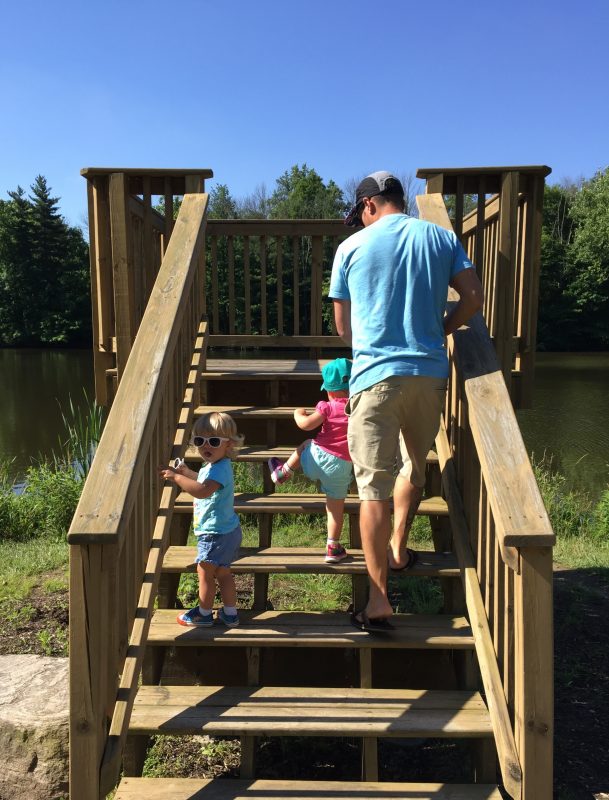 The plan was for the drive to take five days. That’s 15 meals. I decided to pack food for the entire week. I knew this was an ambitious goal, but the thought of coordinating that many restaurants with stops seemed difficult as well. And expensive. I started cooking for the drive a month in advance. I made four hot meals and put them in the freezer. Each evening when we arrived at our hotel I would microwave our dinner. That was our one hot meal of the day. Breakfast and lunch were always cold. There was no snacking. It worked out very well. We ended up going out to dinner once, just for the fun of it. We bought ice once for our cooler. (I don’t need to bore you. So if anyone is interested in the ins-and-outs of a long haul feel free to contact me; especially if you are about to embark on a similar journey yourself.) 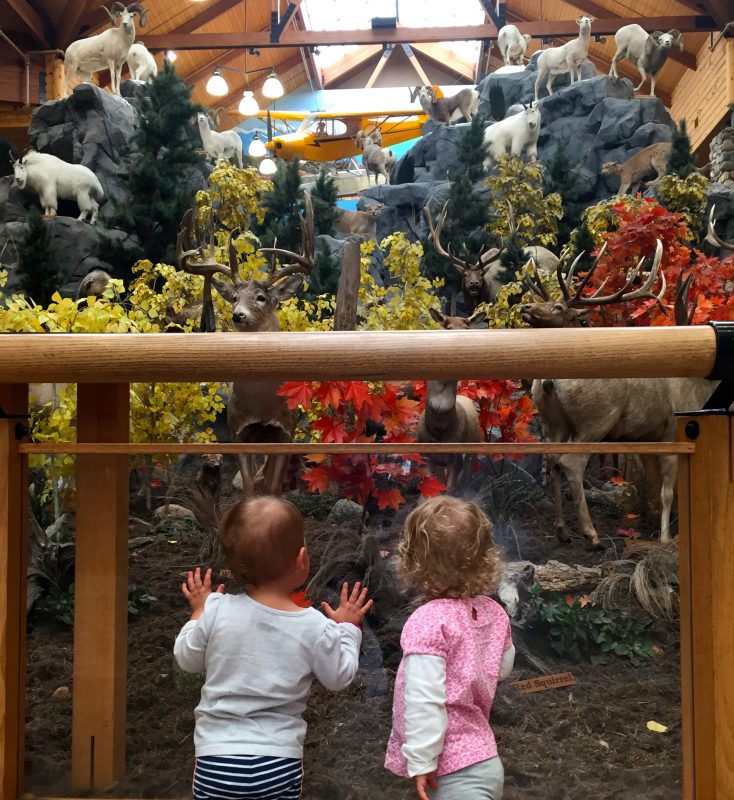 Our drive was fun and interesting. On Monday we drove from Wyomissing, PA, to Shawnee State Park in Schellsburg, PA, to Cabela’s in Triadelphia, WV, to Columbus, OH, and stopped for the night. On Tuesday we drove from Columbus, OH, to Sodalis Nature Park in Plainfield, IN, to Evergreen Hollow Park in Effingham, IL, to St Louis, MO, and stopped for the night. On Wednesday we drove from St Louis, MO, to Grand Falls and McIndoe Park in Joplin, MO, to Oklahoma City, OK, and stopped for the night. On Thursday we drove from Oklahoma City, OK, to a playground in Amarillo, TX, to the Blue Hole in Santa Rosa, NM. It was there, in New Mexico, that Phil got a burst of endurance energy and decided that we were going to make it to El Paso that night. We stopped one more time at a playground in Alamagordo, NM, before sliding into home by 10:00 pm on Thursday night. Thursday certainly was hot and exhausting, but it was nice to sleep in our new home that night and not have to get back in the car Friday morning. 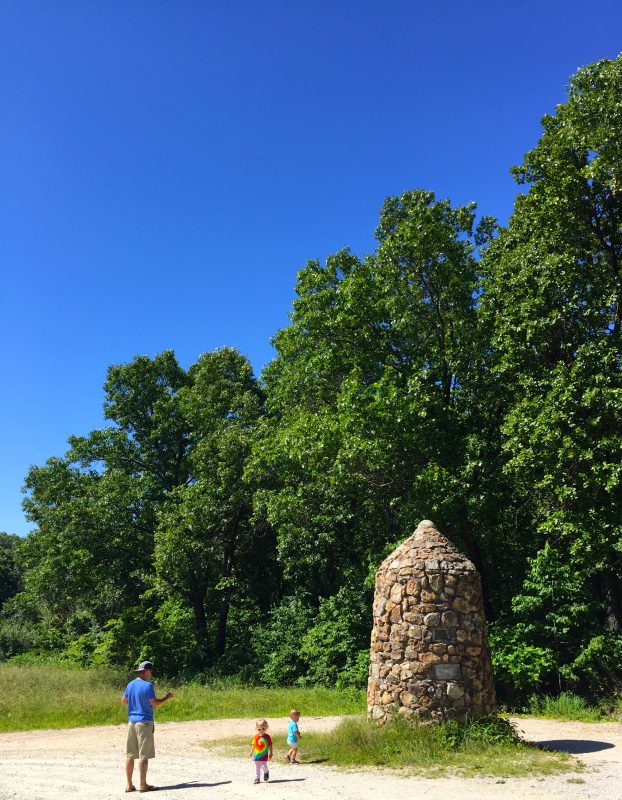 Friday morning was perfect. We had homemade coffee. (For anyone that knows our coffee machine, you know what a joy this is. Thank you Jura.) We had cookies for breakfast and played in the girls’ new bedroom. We are two weeks into our new life here in El Paso and all is well. We are all cleaned up, rested up, and back to a normal routine. Thus I have found time to sit and write. 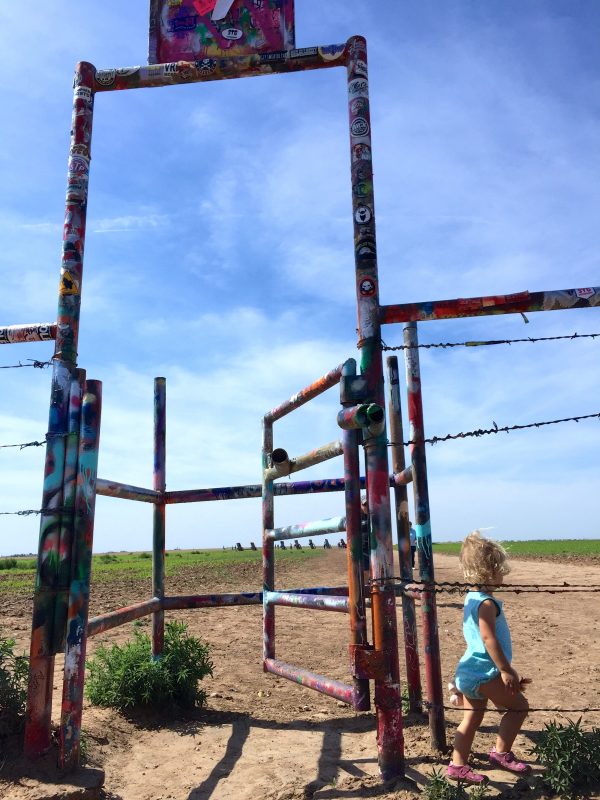 We had a lot of good times while on the road, and as I said, saw a lot of great sites. We drove the Lincoln Highway. Begun in 1912, it was one of the earliest transcontinental highways. It ran through 14 states. 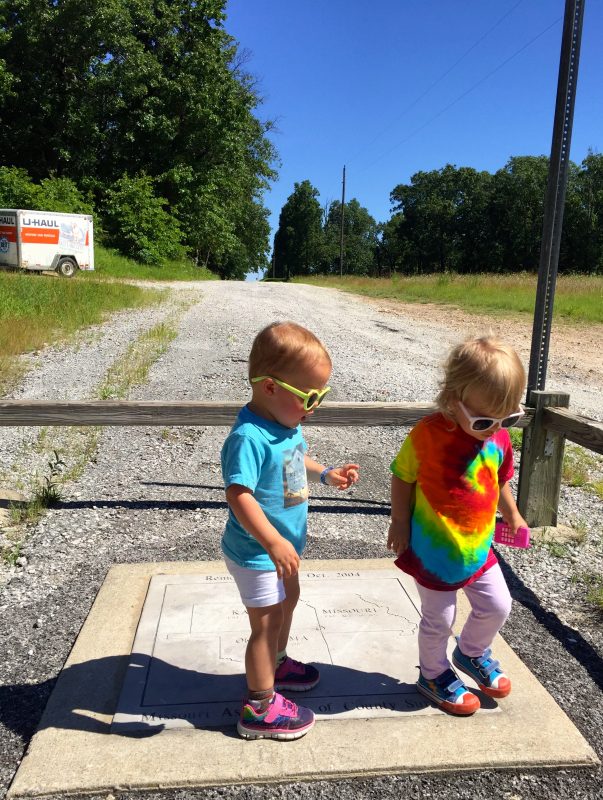 Each time we had breakfast and lunch we were in a lush park, by a lake or river, or at a playground. It was both relaxing and nerve-racking. (As any parent might imagine)

We played in our first waterpark. Watching the girls go down a slide and splash into the water was awesome. (It was both relaxing and nerve-racking.) 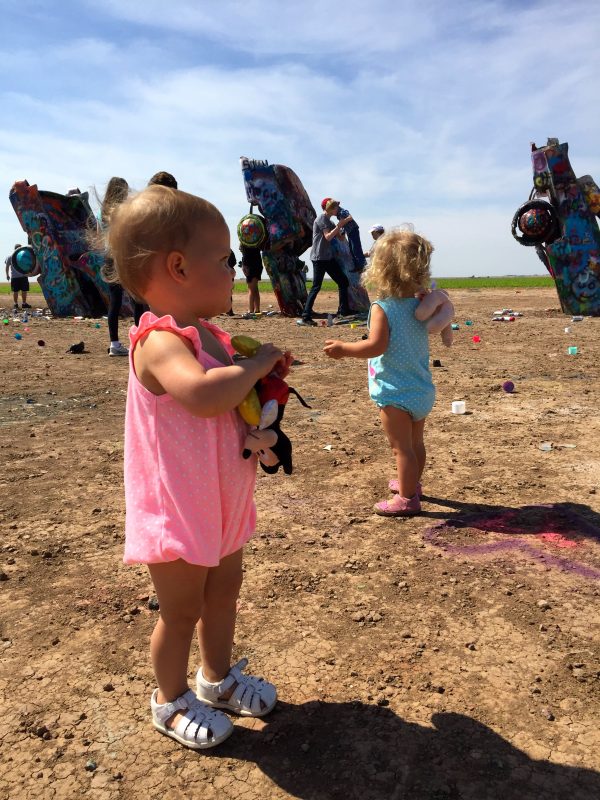 We saw live fish, live buffalo, and live horses all in the same day. In each instance the girls wanted to get closer and closer to the animals; until they were right next to them, and then they didn’t want to have anything to do with them.

We drove around the Flight 93 Memorial in Stoystown, PA, drove past the Arch of St Louis, MO, drove by the Leaning Water Tower in Groom, TX, stood in three states at the same time, and stopped at the Cadillac Ranch in Amarillo, TX. 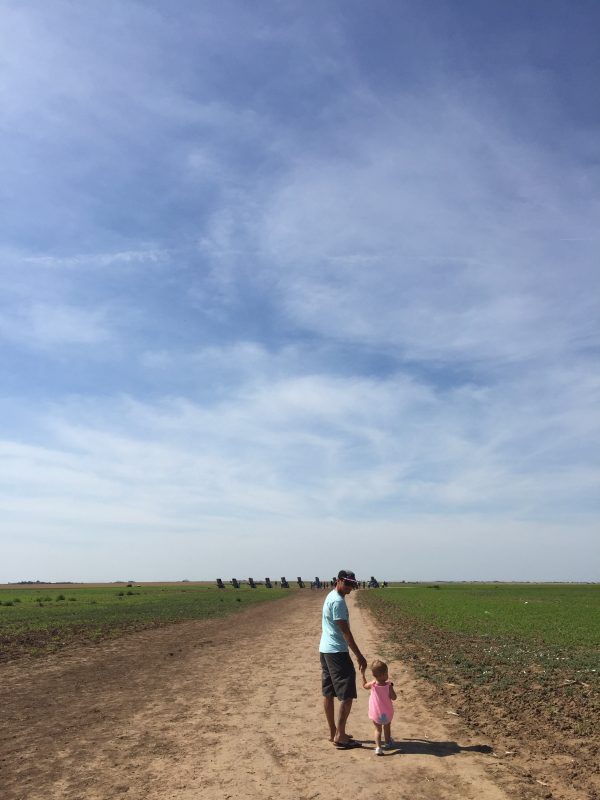 I also made a shoulda-coulda-woulda list of all the things we had to pass. Namely, I lament not being able to stop for the world’s largest windchime, the world’s largest golf tee, a sculpture of a dragon that breaths fire if you put a token in it that you buy at the liquor store across the street, the Big Blue Whale, the Hot Rod museum, the Jesse James Wax Museum, the Clabber Girl Museum, the National Cowboy and Western Heritage Museum, the Totem Pole Park, the Route 66 Steak N Shake, The U-Drop Inn, and the ghost town of Glenrio, TX. The thing is, the U.S. is just too big, and there are too many attractions. I’m certainly not jonesing to sit in the car for hours again soon, but I am confident that we will be continuing to enjoy what this fine country has to offer. Thank you America.