When you live in the center of Europe having a house guest for a couple of weeks incidentally means you will be traveling. As you know, I’ve got no problem with that. My sister-in-law visited us recently, and it was a real blast. In addition to bringing her to some of Austria and Germany’s Must See spots I also used the time as an excuse to get some projects in.

Top on my Home Activities To Do List was making a pie. I love pie, but it’s tough to bake when my household is only two people. You end up eating more pie than you want, and regretting it. Having a guest, I figure, is the best time to make pie. It’s festive, it looks like a lot of work (but secretly isn’t) so you can impress your guest, and the added bonus this time was that we had strawberry season in progress!

Phil, Noël, and I went strawberry picking. Then we came home and cut and cleaned all of the strawberries. Then we made a pie. For our first strawberry pie, I’d say it turned out perfectly. We let the pie cool over night and made some homemade vanilla ice cream for a la mode.

In our excitement for the pie we had overlooked a serious flaw in our menu planning. The next day was also the day Phil was supposed to make his pizza pie. (cue the doom-and-gloom music)

I know what you’re thinking. It’s the same thing we were thinking. How the heck are we going to eat a big pizza and pie and ice cream before Phil goes to work in the late afternoon?

Well, as impossible as this scenario sounds right now, I’m about to thicken the plot… 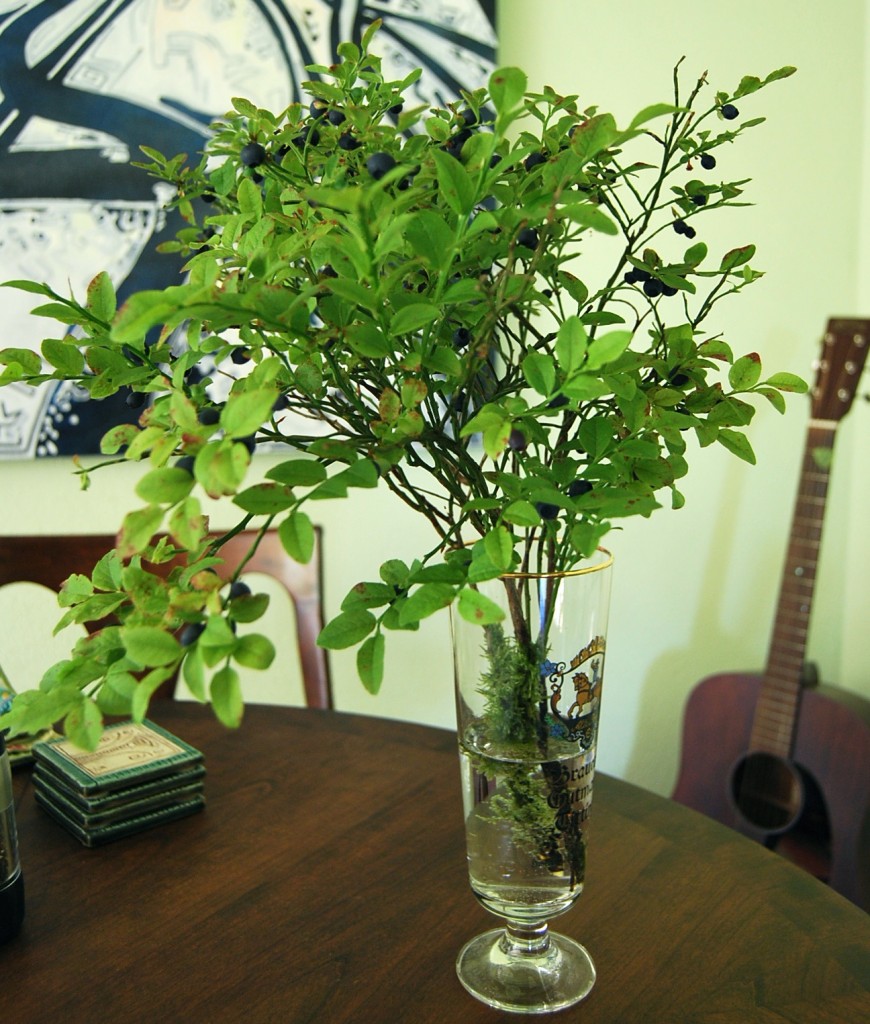 It turns out blueberries are also coming into season. Pizza-Pie Day also happened to be the day Ludwig went out on his first blueberry picking hike and came home with tons of blueberries. After this inaugural hike Katharina makes her fabulous blueberry pancakes. She bakes about 10-15 large (but luckily, thin) pancakes that are bursting with wild blueberries. Of course, they ate what they could, and then brought the rest of the pancakes to share with us. Yikes.

Well, somehow we survived, and I am here to tell the harrowing tale. It worked like this; we had an early pizza lunch, then went for a large hike, then at pie, then I packed Phil blueberry pancakes for dinner. I’ll admit, this was the first time I ever sent him to work with dessert for dinner. That’s not normally my style. And I think by eight or nine o’clock that night, Noël and I were barely hungry enough to polish off the rest of the blueberry pancakes that I did not send to work with Phil. It was definitely a Food Fest, but when you’ve got great food you’ve got to celebrate it. 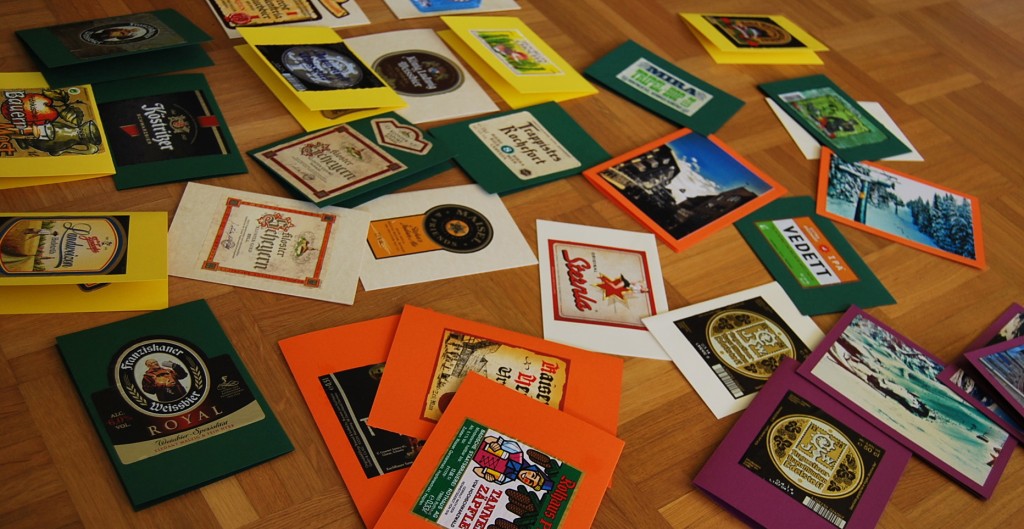 In addition to traveling and food-festing, when you have guests (and you’re on vacation) you do a lot of beer drinking. As you know I’m in the habit of saving the labels from my beer and making greeting cards with them. Noël’s pretty keen on that idea as well; so she dedicated a lot of time on this trip soaking label, after label, off of every bottle we emptied for two weeks. On her second-to-last day in town we rode bikes to the mall and picked up some stationary. We went home and had ourselves a greeting card making assembly line. I’m impressed by the number of cards we cranked out that afternoon. I even dug into my own stash and we made some new cards for me as well.

And because DIY is addictive, the personalized cards were not the only project we got into. We’d been holding a couple of facts in our minds. They were floating around, bumping into one another until they finally lined up together for a great idea. Here are the facts in no particular order:

When people dress up in Dirndl’s and Lederhosen they look adorable.

We had Zweigelt, Dirndls, Lederhosen, a camera, and a bit of free time. 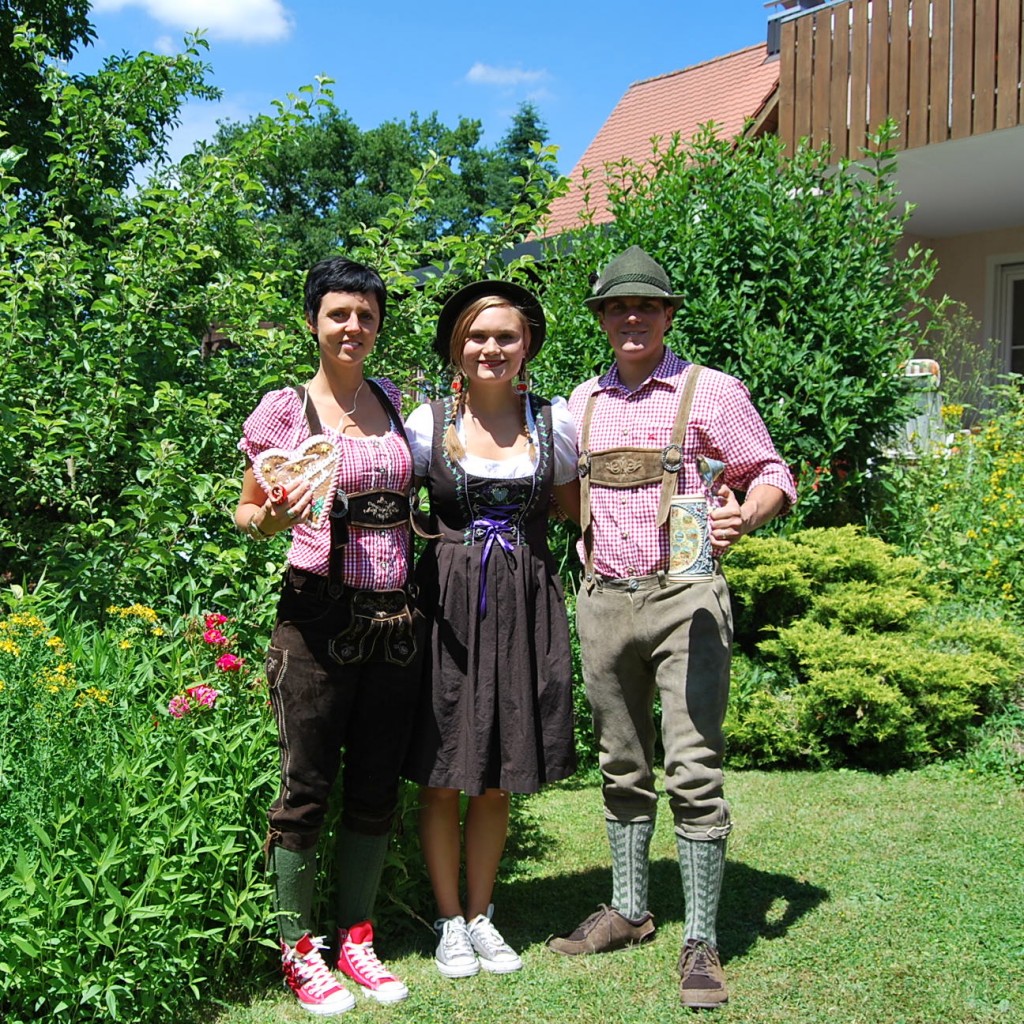 We had ourselves an amateur photoshoot, developed some shots of us in the yard in our costumes, and glued a photo to a wine bottle in lieu of its original label, and Noël brought it home to her mom.

Again, I know what you’re thinking. And I can’t disagree with you.