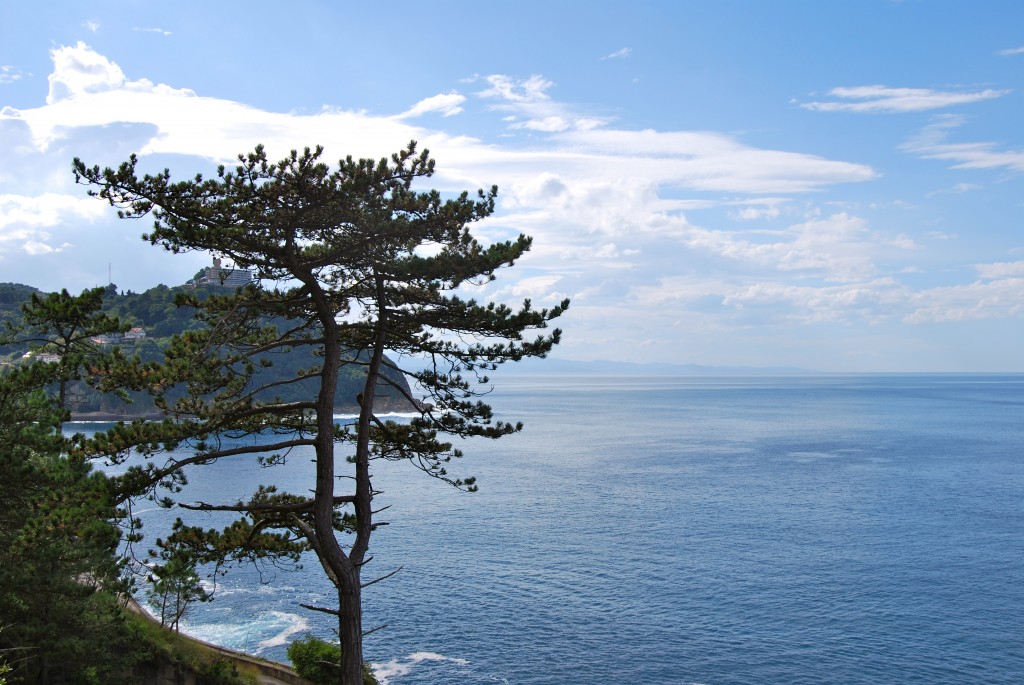 Before I jump right into How My Latest Vacation Was, I feel the need to take a minute and describe Where I Was. It is a place, and a culture I didn’t really know existed before I did my trip research. If you are familiar with the region and the Euskaldunak (the Basque speakers) then feel free to jump down to the next section. If not, here we go.

The Basque Country, which is part Spain-part France, lies between the Picos de Europa and the Pyrenees, along the Bay of Biscay. The region is connected to Adam & Eve, Noah’s Arc, and The Lost City of Atlantis. How? I have no clue. I just read that in my guide book and found it impressive. I also read in the book that Basque fisherman are credited with finding North America. The Basque people are known for their independent spirit. Beside that, I couldn’t find much on facts. They may be the world’s oldest race. They may have descended from Cro-Magnon. (who lived in the Pyrenes 40,000 years ago) There are many educated guesses about these people and their origins; but the only certainty is that they are here now and have been for a long time. And since the beginning of this long time they have preserved a language (the origins of which are also unknown) and culture.

You visit this part of the world for great surfing, great food, to learn to play Jai Alai (the fastest game in the world), and to drink wine. You could also visit for a festival or two; say the Running of the Bulls or the San Sebastian Film Festival. There are many famous towns in Basque Country, Pamplona and Guernica to name two. We visited Bilbao and San Sebastian. 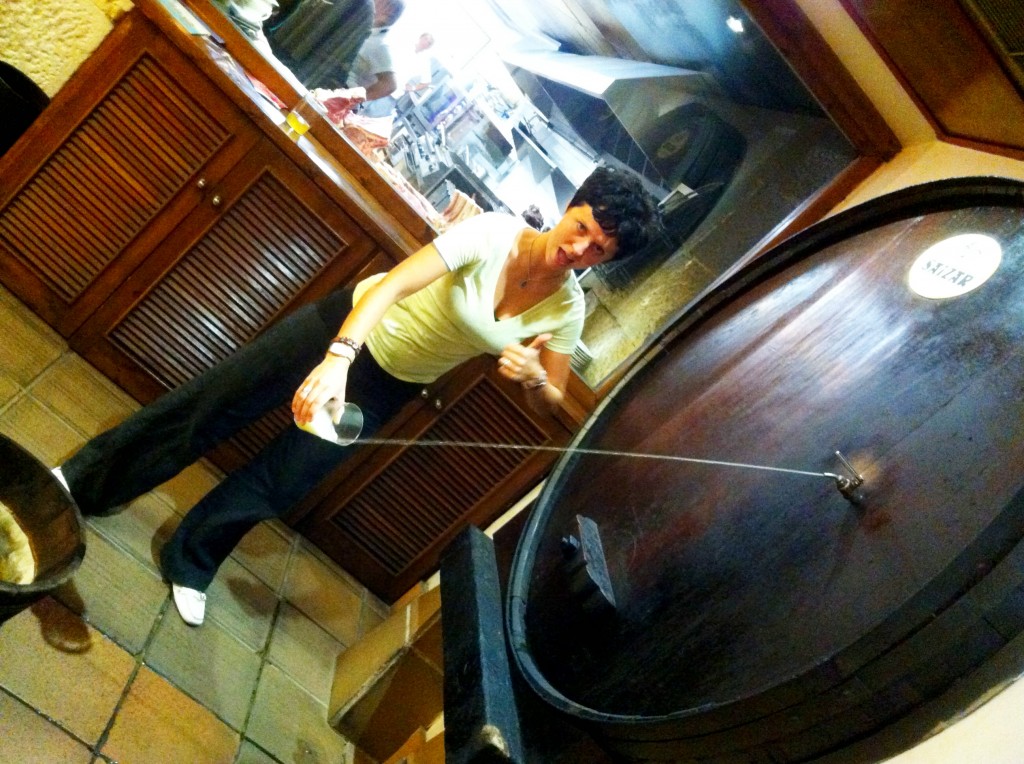 The people are nothing short of unbelievably friendly. After our drive from the airport we hit the first café, just around the block from the parking lot in town, for a quick refreshment before checking in to our pension. (Pension is European for cheap hotel.) It was a perfect first impression; our inaugural interaction with this local specimen…the bartender. He was big smiles and encouragement as he welcomed us to this special area of Spain and tried to help us learn our first few words of Euskera. These words, hello and thank you, were soon forgotten as the swell of the excitement of discovery filled our brains.

Our pension was located in the Casco Viejo, the old town. It was a nice, clean, affordable accomodation in the epicenter of noise in Bilbao. Oops. The greatest restaurants, pubs, and pastry shops in Bilbao are in Casco Viejo…and so are all the people. The only quiet time you are gifted, in a bedroom over the streets of Casco Viejo is between 6:00 and 8:00 am.

To eat in the Basque Country is to be on a culinary adventure. We made sure we got right into it. Despite my normal travel habits; there would be no eating in an awesome Indian restaurant because I’m in a major city for me. No sir. When in Basque…eat Basque. And wait…to eat when a Basque eats. My first lesson in waiting. The restaurant opened for dinner at 8:00 pm. It was two hours before my bedtime and I was the first person seated for dinner. Time aside, we had a fantastic experience at Arriaga cider house. We drank Cider al txotx, which means shot straight from the barrel, and ate an enormous assortment of local favorites like piquillo peppers stuffed with cod, chorizo cooked in cider, squid stuffed with squid, Iberian ham, and asparagus from Navarra. It was also here that we devoured a wonderfully enormous, deliciously chargrilled T-bone; the best steak I’ve eaten outside the United States. We rolled out of Arriaga with heavy bellies and heavier eyelids as young families (like the kind with babies and toddlers) were just bouncing in for dinner.

It was also during our first day in Bilbao that we found the souvenir we wanted. It’s called La Rana. It means The Frog in Spanish, and it is a popular (yet impossible to purchase) pub game here in Spain. It’s a small cast of a frog, with an open mouth, that is mounted on a podium. From a distance away one throws metal discs at the frog, aiming for his open mouth. It is extremely difficult to land a disc in the frog’s mouth, and the crowd can be incredibly enthusiastic when the old guy wanders up, with thick glasses, a great mustache, and a Basque beret, and nails two out of four. This old dude enjoys the crowd’s enthusiasm so he’ll tell a few jokes for further entertainment, (which you won’t understand because you don’t speak Euskera) flash you a few great smiles, and walk away leaving half of the wine in his glass unfinished. It is a great source of entertainment during happy hour, while you’re waiting to go to dinner. And it was here that Phil and I enjoyed our first cañas (small beers) and were welcomed to the neighborhood with an invitation to join in on a few rounds of La Rana. It goes without saying that we fell in love with the game, and the hospitality it represented for us, and we wanted to buy our our La Rana game and bring it home. We spent the rest of the trip popping into every local gift (and game) shop inquiring about La Rana. Despite the joy it brings, no one sells it. (We remain on a Find La Rana mission.)

Enough of steaks and frogs. Let’s talk about Art. What’s the real reason everyone visits Bilbao? 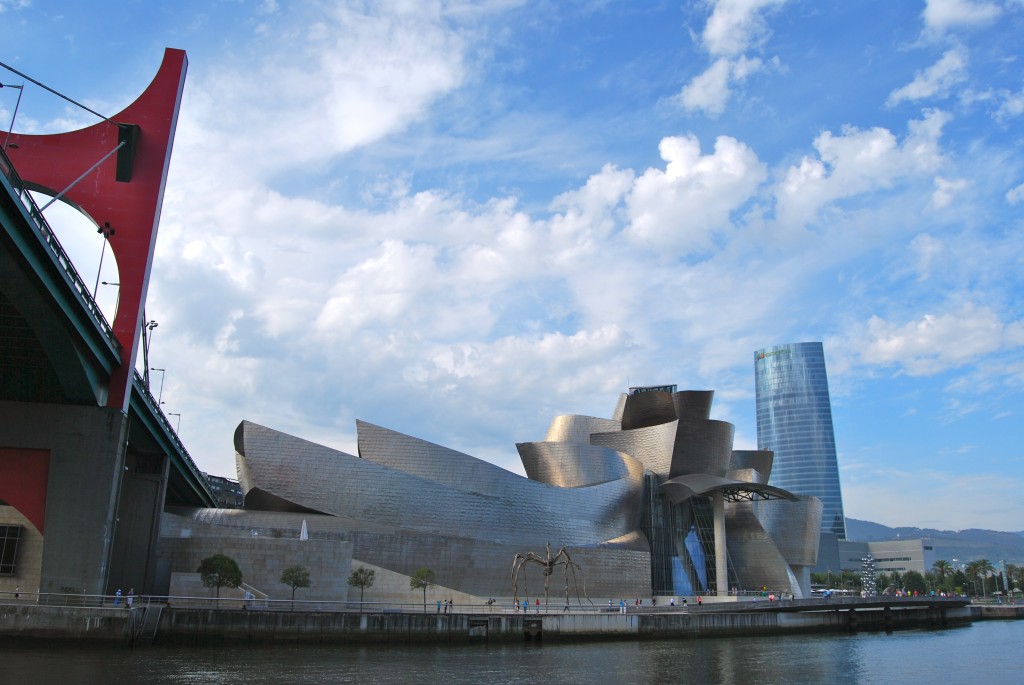 Interesting fact here: In its construction 60 tons of titanium were used, and as the plates of that material were wrapped around the building’s contours they were never more than 3mm thick.

There are quite a few architectural triumphs, and interesting bridges, in Bilbao but the Guggenheim takes all the love. As it should. The building is wonderful. You could, absolutely, be satisfied only walking around the outside, gazing at the many twists, turns, coves, shadows, and reflections of the art musuem. Adding to the granduer are the soft sounds of street musicians in your ear. The grounds also play host to numerous interesting, amusing, and aesthetically pleasing sculptures. My favorite of which was Jeff Koons’ hilarious masterpiece Puppy.

In my opinion, the building that shelters the Art does a lot to elevate the Art and inspire the observer. This particular structure is so impressive, unlike anything you’ve ever been close to, that you are well prepared for the Art surprises that await you inside. Some of these surprises you will not care about; you will wonder how they got in a museum and who (the hell) would pay money for them. Others, you will find quite fulfilling to walk through, like Richard Serra’s The Matter of Time, but you will not be existential enough to quite grasp its meaning. And still others, like the video/music installation titled The Visitors, by Ragnar Kjartansson, will have you captivated for upwards of an hour.

Bilbao was the most chilled-out city I’ve spent time in. After two wonderful days there we headed to the beach. San Sebastian; where more great food and entertainment awaited. Please check back for that post on Thursday.