As of Wednesday I am officially a member of a league of artists here in Ansbach. They are called Kunstverein Bruecke 92. It means The ’92 Bridge Art Club. They call the R3, Reitbahn 3 Gallery home. In exclaiming as I have just done it may seem like a bigger deal than it actually is. Essentially I have only paid a member fee, and anyone can do that. Anything else to follow is only a promise I have made myself in my head. Now that I am in this group (of artists that are all Germans two times my age that have lived here forever and known one another all their lives) I plan to attend their art workshops at a discount rate, go to more art exhibit openings at R3 and actually start talking to people, have my art and mini bio displayed on their website, and maybe (just maybe) hang a piece of my own art on the wall in their gallery someday. There is, of course, still a huge language barrier for me, so I’ll see what actually comes of it. If nothing, at least I had the cohones to give it a whirl. It’s been another one of my goals since moving to Germany. I’ve been steadfast in helping myself reach (and get close to reaching) many of the other goals I set. There is no reason for this to be different.

Also, now that my German is better I have gotten a, much more, appropriate tour of my backyard from Catharina. I have been informed that we have all kinds of fresh herbs all over the place. I feel a bit silly to admit that I’ve never noticed anything other than our mint last Spring. Now I know we have mint, thyme, oregano, and sage, all growing wildly everywhere. I learned a new herb too. It’s called Lauge. It looks like sprouts and tastes mildly like garlic and chives. Learning about Lauge was a revelation for a few reasons. It’s popular, so I’ve seen it everywhere for sale at the supermarket, as a topping on sandwiches at the bakery. I’ve read the word lauge plenty of times, and I’ve just finally put 2+2 together.

We also had a field trip today. As I sit here typing away, inside on my computer, the weather outside is sunny, breezy, and beautiful. For our trip earlier it was awful, but us Germans never let that stop us. Catharina, Ludwig and I drove to a small town nearby named Merkendorf. They had a Dorf Festival with free admission into the Heimatsmuseum. In German a dorf is a small town and a heimatsmuseum is a small historical building containing antique tools and artifacts from yester-years. A Heimatsmuseum celebrates the town’s history.

We had lunch in Merkendorf first. There’s nothing like a fried piece of pork, potato salad, and a beer on Sunday (especially when that’s the only thing on the menu.)…followed by a history lesson, a few tall-tales, complementary coffee, and homemade cake. 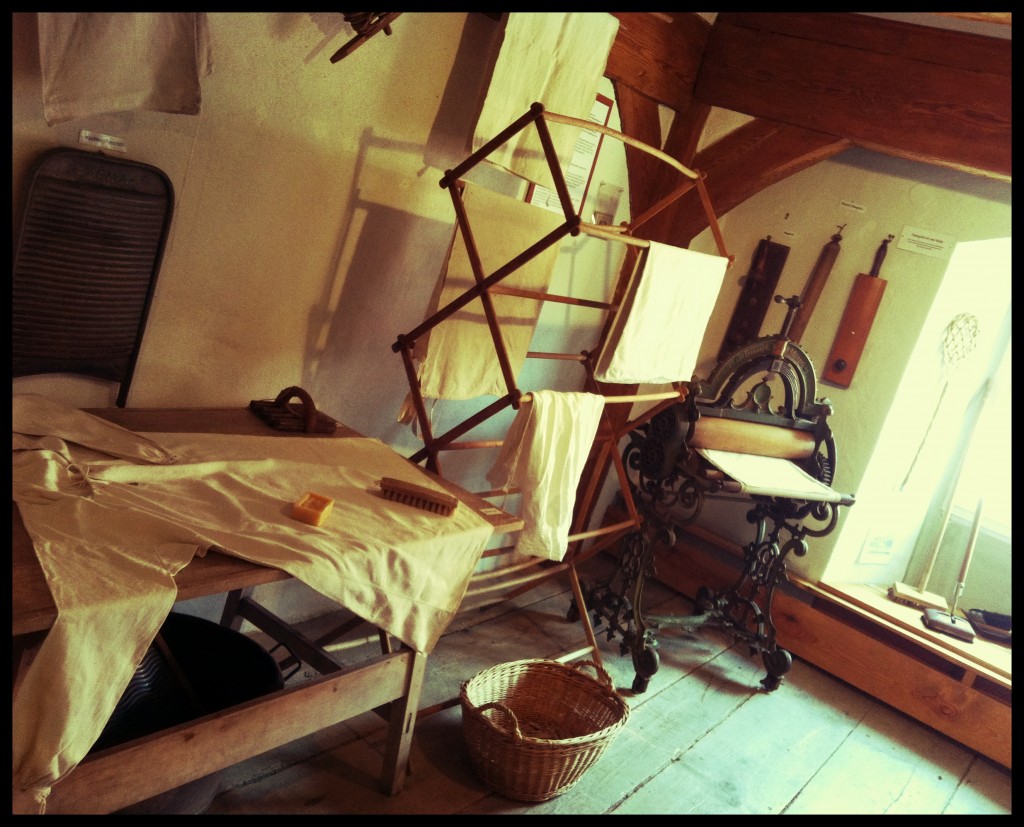 The museum was cute. There was a large tool room with everything from blacksmith tools, to a fireman’s uniform, to an army saddle from the 18th century. There was even a man in there making shoes! There was also a room that was modeled as an old house. It had old clothing irons, washing machines, linens, random furniture. It was similar to what you’d see in America. This room had a couple of old ladies in costume, eating cake, drinking coffee, and spinning yarn. Ludwig couldn’t resist having a few laughs with them. He joked about the coffee they were drinking being 3 centuries old, and commented that it must not taste very good, that the cake must be stale, and that he could surely find something fresher for them. In another instance, Catharina had to use the ladies room and he suggested that she may not want to because in the 18th century the bathroom had no running water. The old bitties were cracking up. I found it adorable.

Every antique article or tool that we walked past, that Ludwig used to have as a kid, he commented on. He had an anecdote for just about anything we’d walk past.

The museum had a school house too. Ludwig really lit up when we got to that room. “This is exactly what my school looked like”, he exclaimed. I found it hard to believe him, but I think he was being sincere. He pointed to the desk and said he had a desk just like it, with an ink well and he used to write with a feather. (I didn’t buy that one. He’s 74. I know they had pens.) There were some small chalk boards and thin pieces of chalk lying on a few desks. Children were using them and writing…like they did in the old days. Then Ludwig dove into another story. This time he said that he had a chalkboard like that as a kid. He’d walk to school everyday with it strapped to his back. They were poor so there was not paper and pencils. He claims to have lived 6km from the schoolhouse. He had to walk to-and-fro everyday. In the Winter there’d be too much snow and he’d have to ski. Unfortunately, between home and school there was a ski jump. (only in Winter) One day he went over the ski jump, as he did everyday in Winter, but it was terribly icy. He fell while landing the jump, and landed right on his back, thus shattering his chalkboard and breaking the chalk into a million pieces also. He had no money or resources to purchase another one so he claims to have been forced to use the largest scrap from his busted chalkboard and a sliver of the chalk for the rest of the school year. “Imagine”, he said, “All of my classmates have a full sized board to write on and I’m learning my lessons on an 8cm x 8cm chunk.” The story made me laugh. It was amusing, but what I found most funny is that it was such a typical story that an older person would tell. Was life really that rough? Or has it just grown to be that rough in his mind through all these years? The truth lies somewhere in the middle and Ludwig is still a better man than I. 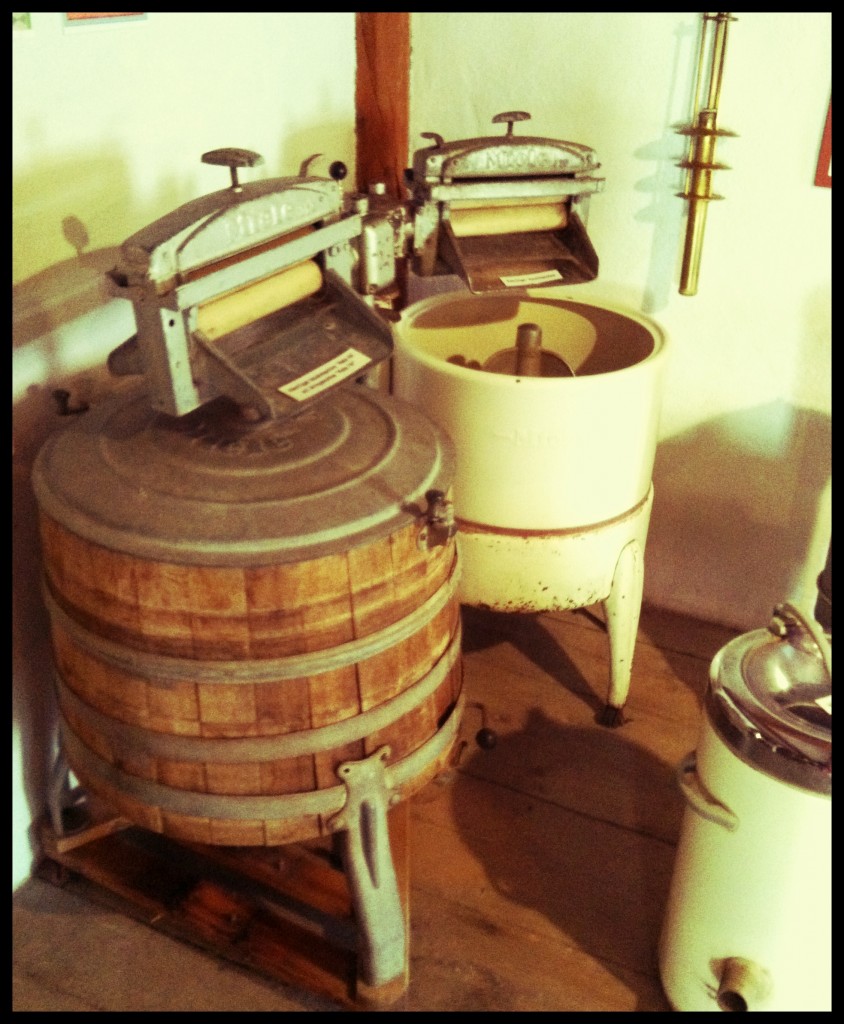 There was also an old kitchen/bakery in the museum. In this room there was a man churning butter…the old fashioned way. Guess what? Ludwig has done that too. Of course he felt compelled to tell the man, and thusly everyone else in the room. It was very sweet and emphatic of course; he threw his arms in the air and smiled. So the man offered that Ludwig take over for a while. I think all the little kids were jealous, but Ludwig declined and the three of us marched on. On our way out of the room I picked up a few pamphlets educating the public on the dairy practices in our local region. I can’t wait to decode them (translate them) and see what information I unlock about the making of milk and cheese in Bavaria. If you are interested, the website is www.milchland-bayern.de

Merkendorfers are known for their sauerkraut. They had a few small displays on how sauerkraut used to be made. Catharina and I bought some sauerkraut and fresh cabbage. I also bought noodles made from egg, red cabbage, and beets. I am excited to cook them. I might eat them tonight! If you’re interested, the family I bought the Kraut from has a website. It’s www.merkendorfer-kraut.de 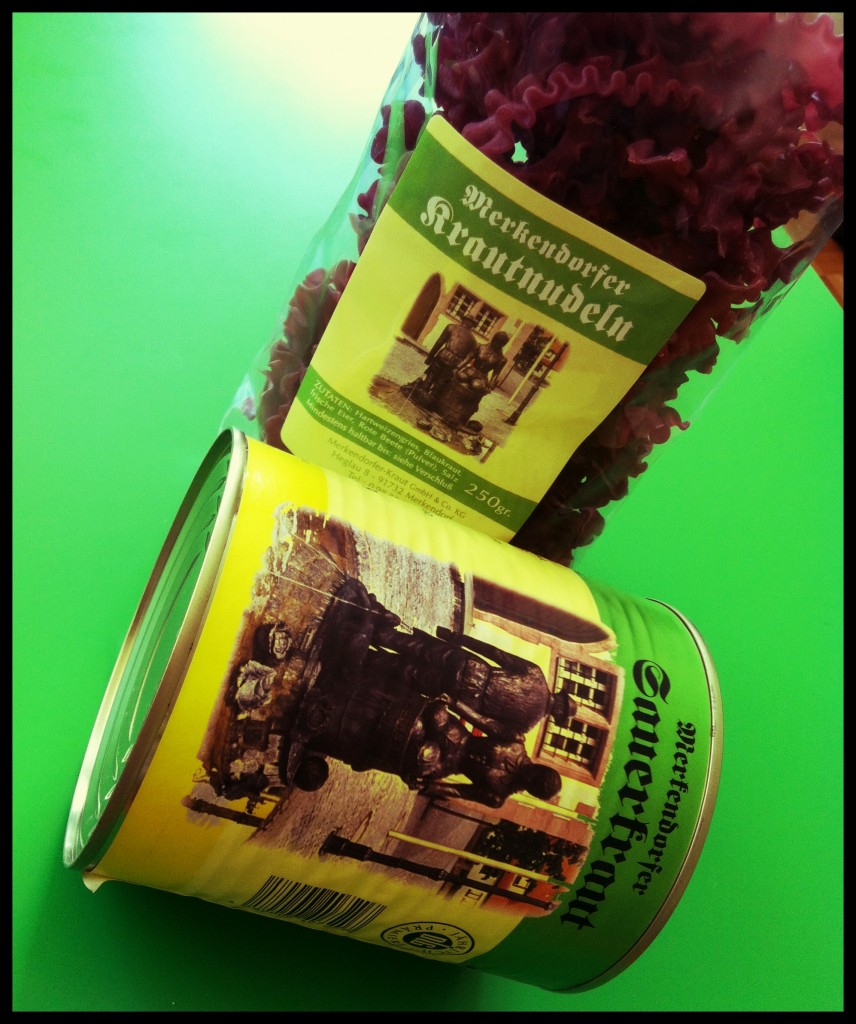 Ludwig, of course, couldn’t walk past the large wooden tub, mallet, and over-sized mandolin without boasting to me that he knew all about how to make sauerkraut. He used to make it as a kid all the time. His parents would slice the cabbage, pour salt on it, and he’d have to get in the tub and stomp it for hours. Then, they would can it and let it mature. Making sauerkraut…or butter…or anything else that keeps Ludwig from the woods it obviously not one of his more highly-favored activities, nor was it ever.

The local bank was serving free coffee in the town hall so we went for a cup. Before you get to the coffee however, there is a long case full of beautiful homemade cakes. There is no way one could resist. So we ended the day with coffee and cake. On our walk back to the car we went by the blacksmith’s studio and demonstration. I don’t even need to tell you that Ludwig knows all about banging on hot metal…forging whatever… you already knew that.